About the site:
Librariesireland.ie houses the shared national public library catalogue of Ireland, and is part of the government strategy for developing and expanding the role of libraries.

Goals:
As per the public library strategy 2018-2022 “There is still considerable potential to increase membership and usage, make libraries more relevant to a broader audience and enhance the role of libraries in the delivery of local services.”

In terms of how that relates to the site, we wanted to focus on improving the ease with which a person could register for the library or browse the library catalogue from their phone. 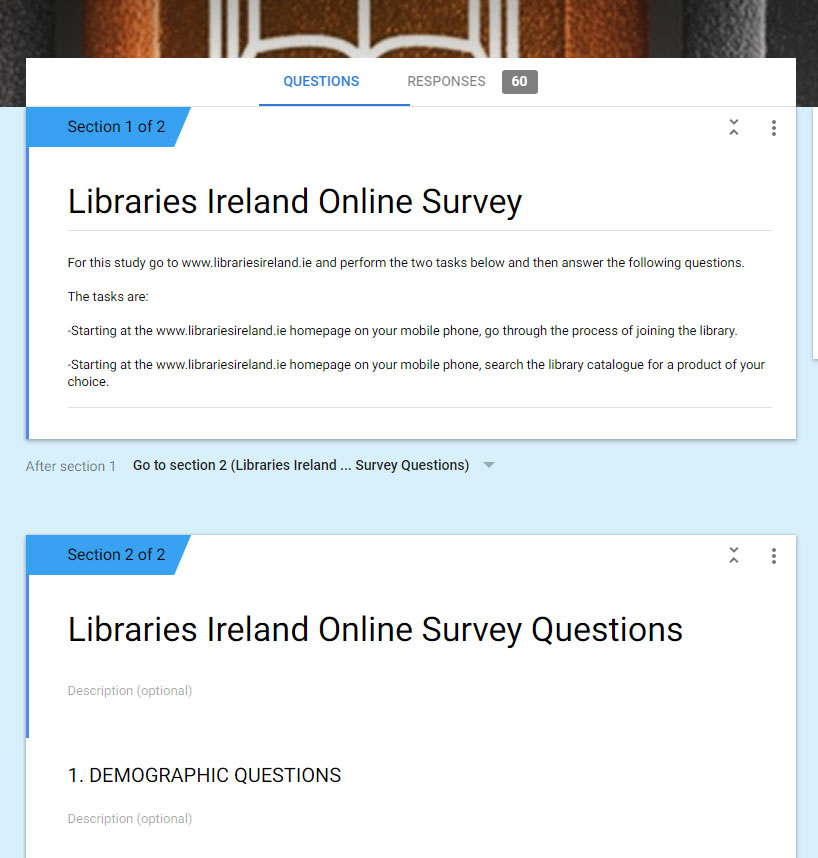 Data collection
To give us an overview of how people interacted with the site and why, there was a range of information we wanted; users age, technical ability, type of phone, gender etc. We also wanted information on how users completed two tasks on the site, joining and browsing the library and how they found that experience. We decided on an online questionnaire and semi-structured interviews to achieve this. The questionnaire was created in Google Forms and distributed online, we closed off the survey after reaching 60 respondants. For the interview process, I observed the interviewee perform set tasks on the site, followed by questions about the experience.

Data Analysis
We generated pie and bar charts from the closed questions using Google Forms and we conducted a thematic analysis on the open-ended questions, to help recognise patterns in the responses and then group them together. Initially we assumed people would have problems with the search feature on the catalogue: in reality, 25% of people had trouble even finding the catalogue. The interviews and observations were a source of useful information, from them we were able to discern that the dropdown menu on the mobile version of site was behaving inconsistently, and it was making the ‘Join’ page difficult to locate. We collected the data from the surveys and interviews/observations and distilled the information into two personas, that were then used in ‘As is’/’to Be’ scenarios.

Browsing the Library: ‘As Is’ Scenario

Jane wants to browse the library catalogue to see if they have a book in her local library. She selects ‘online resources’, but there is no option there to search the physical library stock.

Jane selects some other options including ‘contact us’ and ‘my local library’ but has no success there. the menu is hard to navigate.

Eventually Jane goes back to the ‘join’ page where she first signed up. Midway down the join page is the button to ‘search the shared library
catalogue’. Jane is getting increasingly fed up.

She clicks on it and it allows her to search the library catalogue, the link doesn’t resemble the rest of the site and has a different logo. Jane is suspicious but glad she finally found the link to browse

Jane is unable to limit search to her own library, she can narrow results by county though. Jane is annoyed at the very general results.

Jane gets several results in his search, she is told in the results how many copies of each are available, but not where they are located. She must click into each item to see the location. Jane is confused and annoyed.

How might we help an existing or prospective library member who feels confused about searching for a library book on their phone; they need to search the library catalogue but face unclear navigation and poor user flow.

The menu violated minimalist design by being overloaded with information. It also violated the visibility of system status by having the dropdown appear to cut off, obscuring to users that they could scroll further. The library catalogue search was placed on the join page, which affects the real world logical order of information mentioned under ‘match between system and real world’. The join page was itself obscured by the previously mentioned hamburger dropdown error, compounding the problems the site had. 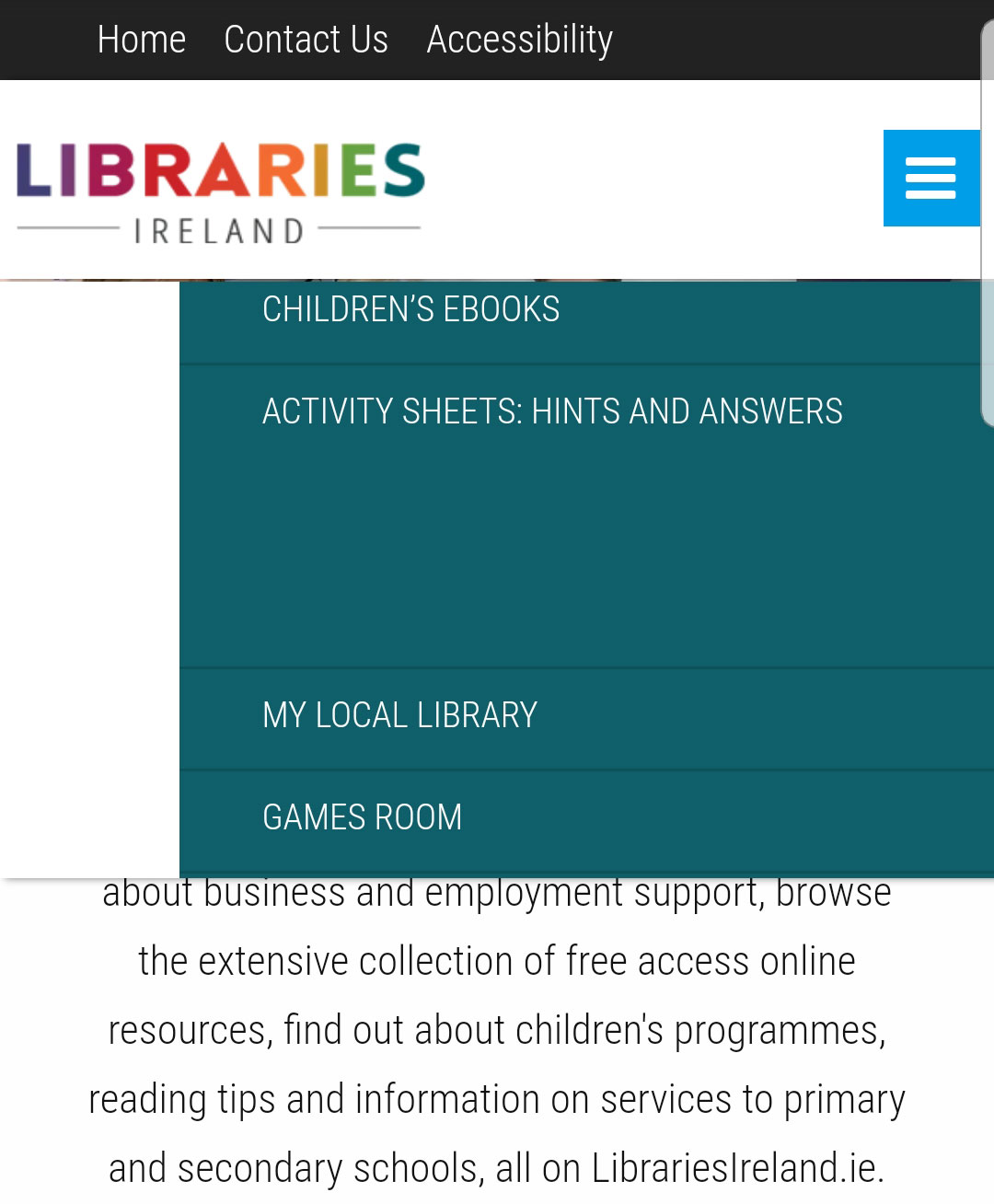 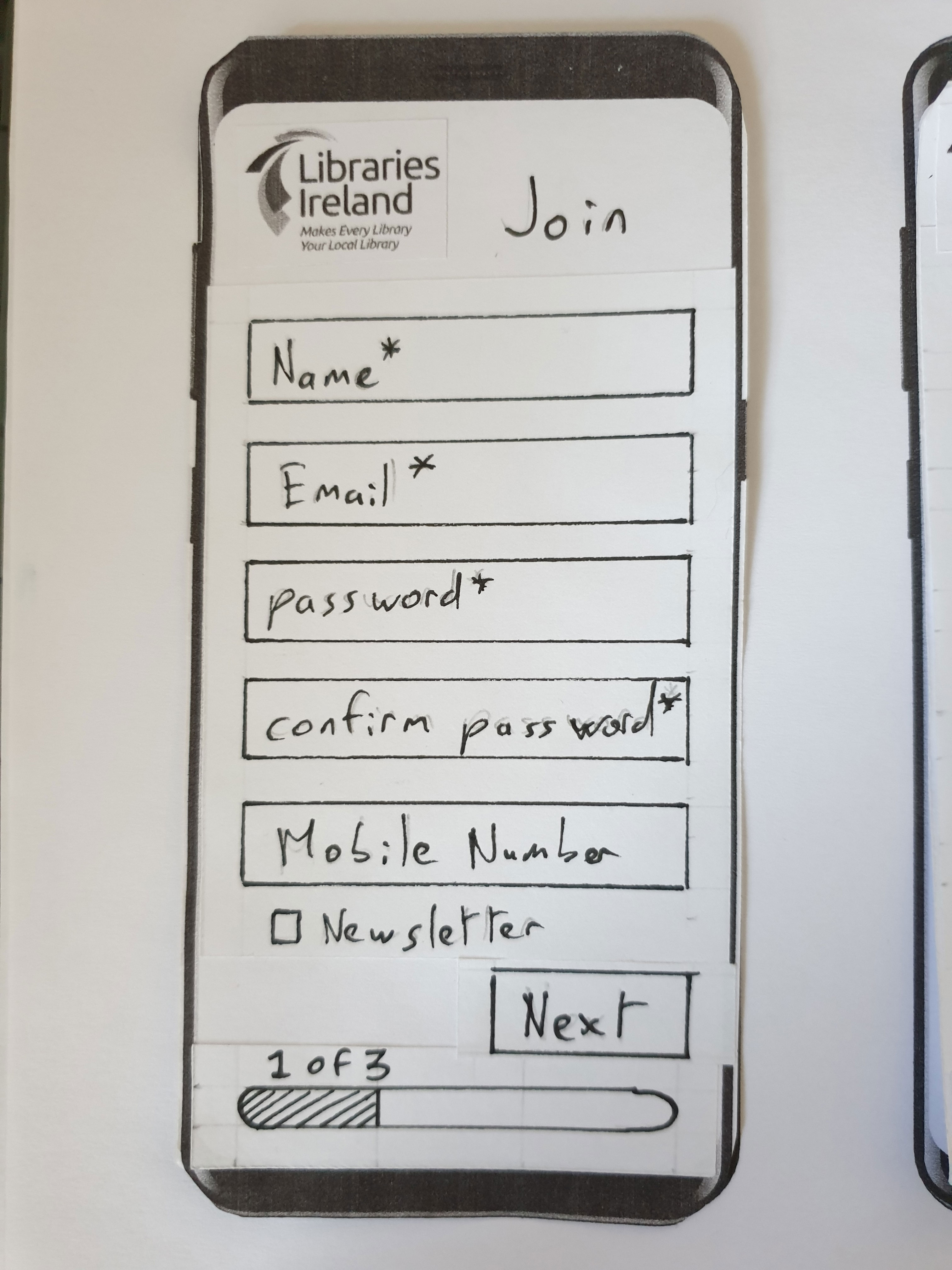 The site contains a lot of information about the variety of community services the library offers; but the most important information for users is about the books available in the library. From the questionnaires in term one, the majority wanted to do three things, search for books, reserve a book, or access digital content in the form of ebooks/audiobooks.

I streamlined the homepage design to focus on these popular tasks and grouped the other library services under one heading of ‘Other Services’. By prioritising these main goals, the interface is cleaner and simpler, while the other information is still readily available if needed.

The ‘search results’ page has a lot of necessary information, so to make it easier to process I applied the gestalt principal of figure/ground to help users separate out the different layers of information. I used colour to create a contrast between the search results and the filtering options. I achieved this using a yellow highlighter marker on the prototype, I felt that by having a deliberately rough colour change would prevent users testing the prototype from getting too focused on the specific colour choice. A video demo of the prototype is available here.

This demo was tested by 4 users, The questions were open ended to try to get qualitative feedback that could be implemented in another iteration. The post-test interview ended with a system usability scale questionnaire to help indicate if there are usability issues.
I went through the recordings of the test and exit interviews and created an affinity map of all the comments that the users made, then organised them in groups to see the most frequent and critical issues. 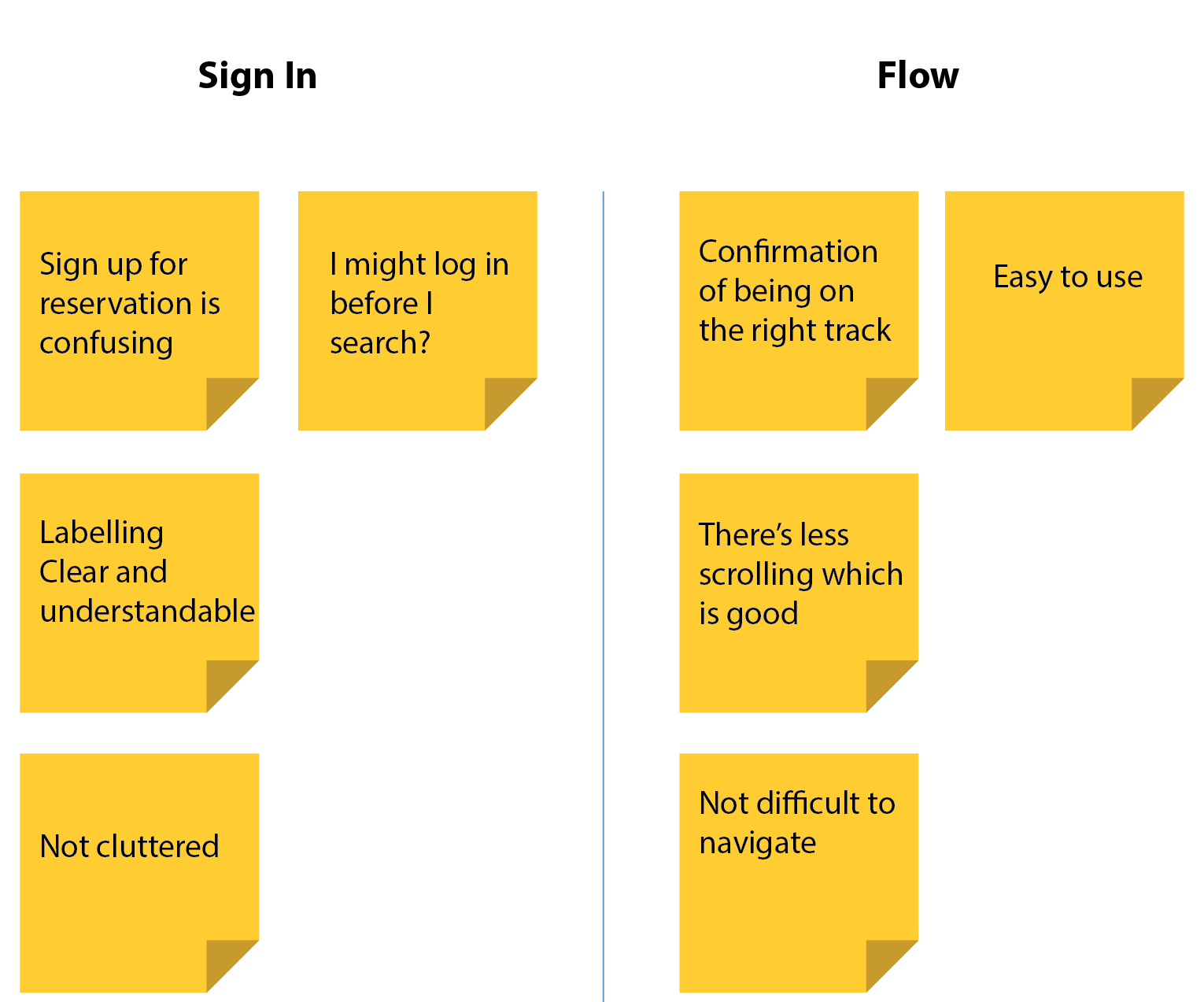 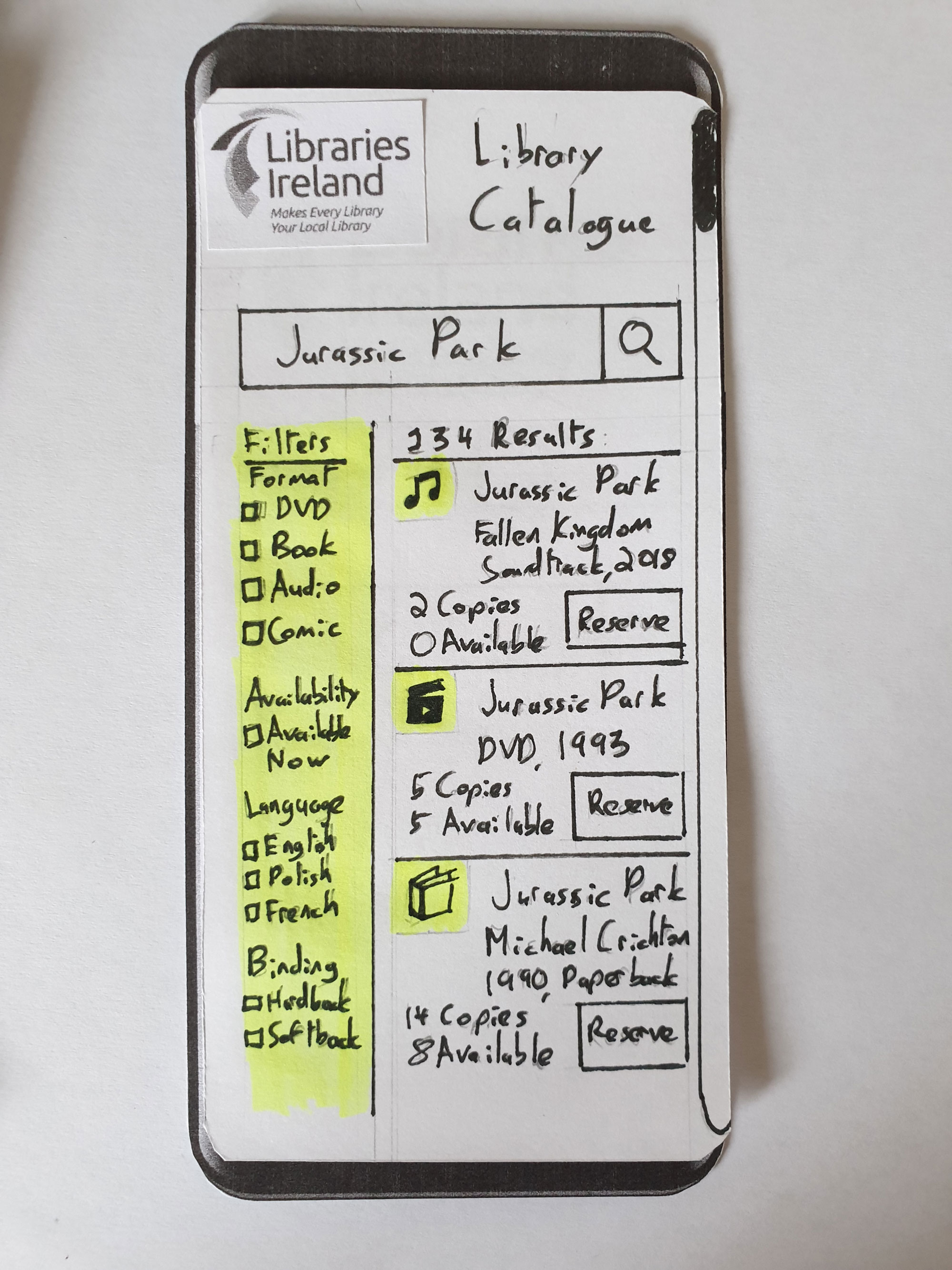 For the next iteration of the paper prototype, I developed icons that can help the user at a quick glance see what format each item in the search results are – a book icon for a physical book and a music note icon to represent an audio item such as a soundtrack or audiobook.
A video demo of the prototype is available here.

Overall I found it very useful to put the next step of UX into practice, from research to designing. I would like to bring some of the paper prototypes further and look into wireframe programs like Marvel app or Balsamiq, but I am glad to the scope of the project kept the focus on the low-fidelity models, to keep the focus on the principals and not a polished looking mock up. 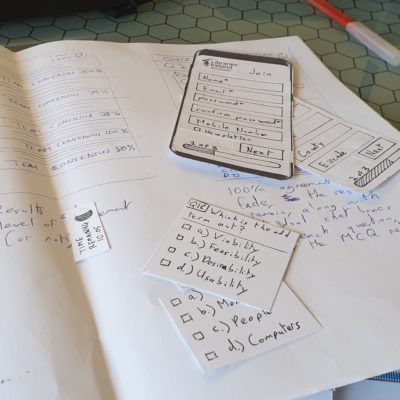 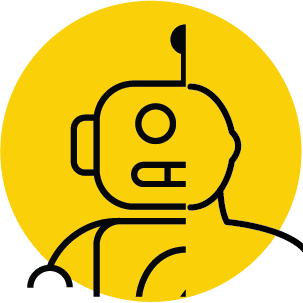 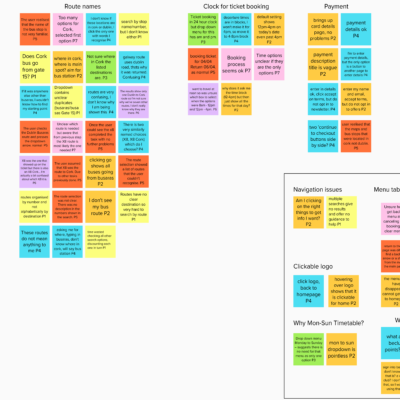 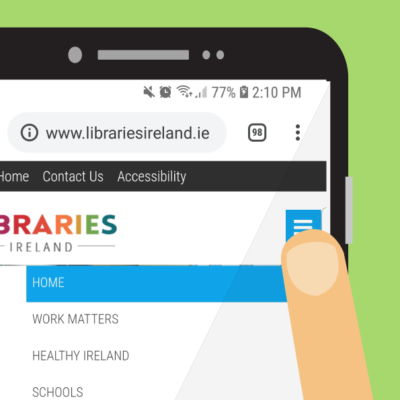